With the horrors of WWII behind them at last, the Allied powers hoped that peace would return to Europe.  Things were not to prove that simple.

Anxious not to repeat the disaster of the Treaty of Versailles, Allied leaders entered into protracted negotiations over the future of a defeated Germany.  Eventually the decision was taken to partition it into four temporary occupation zones - French, American, British and Russian - each zone to be administered by the relevant Allied power, until such time as Germany could safely be returned to independent status.

Berlin, then the capital of Germany, fell entirely within the Russian zone, and so the city was partitioned in exactly the same way as the country, with road and rail corridors running from West to East through the Russian zone to the city's Western Zones.

Several political and economic conditions led to the city eventually being blockaded by the Russians.  On 24 June 1948 all rail and road corridors into Berlin were closed by Stalin.  At the time, West Berlin had thirty-six days' worth of food, and forty-five days' worth of coal. (source: Wikipedia).

The only way into the city from the West was now by air.  The RAF, closely followed by the USAF, began flying supplies in immediately, initially for troop support.  But it soon became clear that the operation would have to be vastly increased in scale to cater for civilian requirements as well.  And so began the greatest humanitarian achievement in the history of aviation:  the Berlin Airlift.

I can't do a better job of describing the Airlift than this marvellous old newsreel does.  It gives me goosebumps every time I watch it.  Look out for the Handley Page Hastings and the Candy Bomber.

Dad flew the entire Airlift, starting in a little-known detachment called the Plumbers.  Based at RAF Honington in East Anglia, their job was to fly aircraft parts and other maintenance requirements into Wunstorf in Germany, so that aircraft taking part in the Airlift didn't have to be returned to the UK for maintenance, and could be repaired quickly in the event of a mechanical problem.  Flying the Douglas Dakota, they went backwards and forwards with engine parts, machine tools, instruments, you name it. 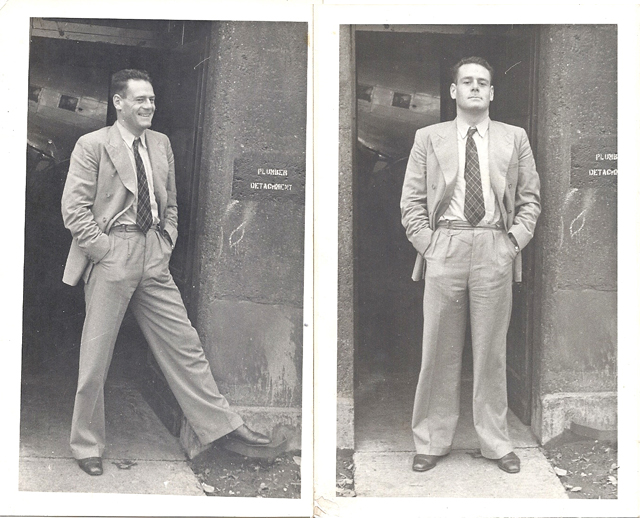 Dad in civvies photographed outside the Plumbers hangar at RAF Honington, c. 1948. A Douglas Dakota can be seen inside the hangar. I suspect these photos are a real rarity.

The CO of the Plumbers was a Flight Lieutenant John "Tank" Tancred, who became one of Dad's best friends in the RAF.  (The other great friend he made was Jock Kennedy.)  Dad and Tank kept in touch and played rugby for the same RAF team, and when Tank was tragically killed in a crash, it was Dad who went to tell his wife.

I would guess, although I have no proof, that Tank took these photos.

Dad flew with the Plumbers from summer in 1948 until the end of January 1949, and was then posted to 10 Squadron, flying Airlift sorties from Lubeck in the Western sector into Berlin Gatow, still flying Dakotas.

But the Dak could only carry about three tons, and with the blockade still in place, stepping up the daily tonnage was vital.  It was at around this period that the RAF introduced what was to become its standard long-range transport aircraft, and Dad's great love, the Handley Page Hastings.  Much faster and more powerful than a Dakota, and capable of carrying ten tons fully loaded, the Hastings was a huge boost to the RAF's transport capability.

After some leave in April 1949, Dad went off to 241 Operational Conversion Unit at RAF Dishforth in May 1949, and qualified on the Hastings at the end of June.  In July he was posted back to the Airlift, this time on 297 Squadron, flying sorties from RAF Schleswig into the newly completed airport of Berlin Tegel in the French sector.  He was posted to 53 Squadron in August, still flying the same route, and from September 1949 went back onto the Schleswig-Gatow run.

What is notable about this period is that the blockade had already been lifted (in May 1949).  The USAF stopped flying once the blockade was officially over.  The RAF, however, elected to maintain sorties until the flow of goods by rail and road was completely re-established, and ended up flying Airlift sorties until October 1949, thus making it clear to Stalin that if necessary, they could and woulds supply Berlin by air through another winter.  Wisely, he didn't take up the challenge.

The last sortie of Operation Plainfare, the RAF's Berlin Airlift operation, was flown on 6 October 1949, from Schleswig to Gatow and back.  It looks as though 53 Squadron did the honours;  Dad was there, in Hastings TG 524, and the last landing was made by a Flt Lt Harper, also in 53 Squadron, and also flying a Hastings.  (Thanks to Andy Simpson of the RAF Museum for finding this information.) 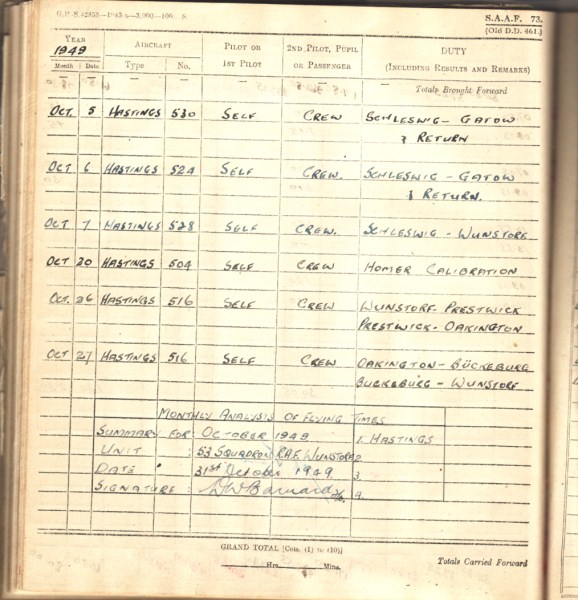 Log book for start of October 1949, showing Airlift sortie into Gatow in Hastings 524 on 6 October