There has always been some friendly rivalry between British and US forces, and going by some of the stories on this site, you could be forgiven for assuming that we Barnards are a bit anti-American.

Nothing could be further from the truth, and in fact my favourite war hero of all time was an American.

Kurt (surname unknown) was a US Marine who served on Guam in the Pacific Theatre of Operations during the latter part of World War II.

On patrol one night, Kurt was acting as point guard and overheard evidence of a large Japanese ambush.  He warned his patrol in time, and in so doing saved the lives of 750 Marines who were bivouacked fast asleep nearby; but in giving the warning, Kurt also gave his position away to the Japanese.  He was critically injured by an enemy hand grenade, and most of the flesh was stripped off his spine.

He was carried back to the bivouac, and a surgeon operated on him all night in a foxhole to try to repair the damage, but he was unsuccessful, and in the early hours of the morning, Kurt died.

There were no facilities to ship him home, so he was buried in a small military cemetery on Guam.

Kurt was dead, but his actions were not forgotten.  Several years later, long after the war was over, some of his friends, including the surgeon who had operated on him, Lt. Col. William Putney, went back to Guam to find his grave.  To their horror, they could not find the little cemetery where Kurt and some of his companions had been buried.

Military officials on Guam explained that a typhoon had destroyed the burial site, and that the gravestones had been moved to a remote and overgrown jungle location.  “It was a disgrace,” said Putney, “a disgrace and a dishonour.”

Back in the US, Putney and his friends vowed to create a fitting memorial for Kurt and those who had died with him.  Their efforts were successful.  The cemetery was recommissioned and headstones and plaques placed on the graves. In addition, a lifesize bronze statue of Kurt was commissioned from sculptress Susan Bahary, and on 21 July 1994 the statue was shipped to Guam, where it remains in the cemetery as a tribute to the courage of Kurt and his companions. 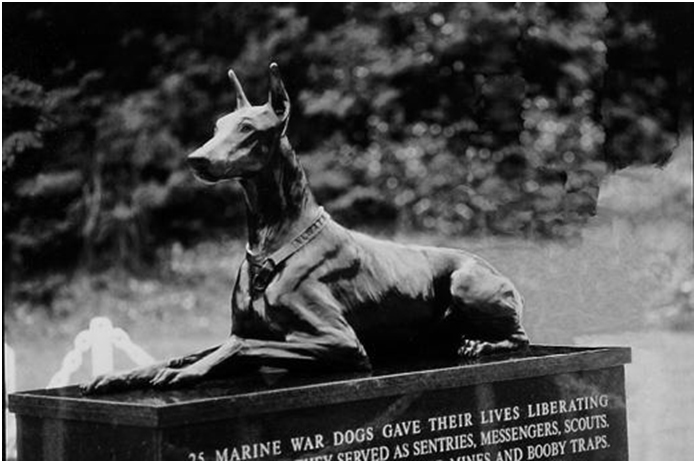 The War Dog Memorial represents Kurt, the dog who gave his life to save 750 of his human friends and fellow-combatants.  Inscribed on this memorial are the words: "To honor the working dog heritage of the Doberman Pinscher”.

The United Doberman Club-sponsored bronze memorial was created by Susan Bahary and placed at the United States Marine Corps War Dog Cemetery in Guam on June 20,1994.   "Always Faithful" stands as a memorial to the greatness of the Doberman.

When United States Marines landed war dogs on Bougainville in the South Pacific, 01 November, 1943, it marked the first use of trained military dogs in combat by the United States. Dobermans, the official U.S. Marine Corps War Dogs, affectionately known as the “Devil Dogs”, served throughout the South Pacific, courageously leading patrols in the steaming jungles, giving timely warning of the enemy waiting in ambush or hiding in caves, saving untold lives. They guarded exhausted sleeping troops in foxholes by night, preventing infiltration by the foe.

After the war, many of the dogs returned to civilian homes, where, despite their training, not one of them was ever known to have bitten anyone. Attractive targets of an enemy anxious to go undetected, not all the dogs made it home. Some of the dogs made the supreme sacrifice. They lie buried in The War Dog Cemetery on the island of Guam. Their graves are marked with small headstones and a plaque.

'He is your friend, your partner, your defender, your dog. You are his life, his love, his leader. He will be yours, faithful and true, to the last beat of his heart. You owe it to him to be worthy of such devotion.'     - Anon.

Click to see a photo of the statue.
Joomla SEF URLs by Artio