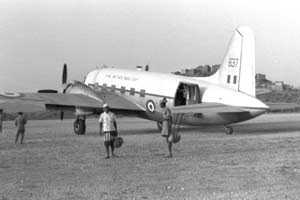 Valetta at Dhala. Photo: Peter Pickering of http://www.adenairways.com. Used by kind permission.Late in 1961, after heavy rains, the Juba River in Somalia burst its banks, causing widespread flooding and devastation.  The situation was clearly too much for the Somali government to handle, and aid poured in from around the world, including from the RAF.  The flooding, including the RAF airlift relief effort, made the news around the world, and there is still an article about it on the BBC's This Day in History site here.

At the time, Dad, who had by now attained the rank of Squadron Leader, was OC 233 Squadron in Aden, and, along with a few Transport Command Valettas, was detached to run the supply drop portion of the airlift.  In those days, helicopters were scarce, newfangled gadgets, and the precision drops were done using fixed-wing transport aircraft.  You can imagine the difficulty of finding a small of group of desperate people, clinging to trees, buildings or anything else that was still above water.  And once they had been found, the pilot had to calculate his speed and the wind drift with sufficient precision to drop desperately needed food, medical supplies and water purification pellets by freight parachute,  accurately enough so that the people below would be able to retrieve the goods - and all of this in appalling weather amd heavy rain!

Under conditions like these it was small wonder that the few precious USAF ambulance helicopters were kept for airlifting out the most critical cases......