Without John Deegan, it is very unlikely that this site would exist.  He was the person who, above all, first taught me to see my father as a man with a history and a story of his own, as someone subject to enormous influences that had nothing to do with me, but were simply part of the great, impersonal sweep of human history, and the history of war.  A Koevoet veteran who experienced the worst horrors of the South African bush war, John never fully escaped his own demons; and yet, as haunted as he was, he never lost the ability to reach other people and to touch their lives.

His memories tormented him to the end, and in many ways his early and untimely death from leukaemia must have been a release; and yet he will be missed, for his sweetness, his humour, his tongue-in-cheek craziness, and his ability to can the cackle and get straight to the truth of any situation, no matter how unpalatable.

So it is fitting that a corner of this site should be dedicated to his memory. 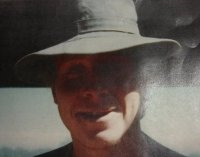 "So I have travelled throughout the land and was a pilgrim all my life, alone and a stranger feeling alien.  Then Thou hast made grow in me Thine art under the breath of the terrible storm in me."

You can join a Facebook group in memory of John here.